Upon hearing about the Collaborate to Train (CTT) project, a local Artist, Mary Courtney, approached the FabLab to create a mechanical fish as part of her submission to the “Spon Spun” local arts festival in 2018.
FabLab volunteer and Open College Network L1 Digital Fabrication alumnus, Marie Sindel and a staff member took on the commission as part of a CTT work placement. The resulting piece formed the centrepiece of an artwork, combining kinetic sculpture, poetry and song, winning the Visitors’ Award for the festival.

Mary Courtney had engaged with FabLab Coventry previously, undertaking the Open College Network L1 Digital Fabrication course and attending public workshops. She approached FabLab with a concept linked to the former Moira’s Wet Fish Shop, a historical building in the heart of Spon End, which is now the offices for Grapevine, a service supporting people with learning difficulties.
Marie Sindel, a volunteer skills in graphic design and cosplay fabrication, took the lead role, supported by Jack Shuttleworth, Technical Skills Instructor.

Marie worked with Mary and songwriter, Chris Sidwell, to develop the concept, using her skill-set to define an achievable outcome. The concept was to represent many elements of the Spon End neighbourhood: the old fish shop, the ‘Black Swan’ pub, the mosaics from subways and the history of the watch and cycle manufacture. An exposed mechanism of laser cut cogs would drive the mouth and tail, and the skin would also be lit from within.

Jack developed the mechanical innards, while Mary concentrated on the overall form, and was also trained to use the laser cutter to create filigree decoration for the fish. Overall the project included a range of technical challenges that generated a learning curve for Marie and Jack, with a number of critical elements that could not be tested until late in the process.

The CTT work placement lasted for 5 weeks, with ongoing monitoring sessions with commissioners Mary and Chris, and public engagement sessions, including with learning-disabled users of Grapevine’s services.

The festival itself was a trail of artworks, stretching from lower Holyhead Road to the Langar Centre in the City Arcade, Coventry. Sponnie and his accompanying poetry and song, drew a steady crowd of smiling visitors throughout the day.

The festival judged exhibitors through a Curators’ Award / runner-up and a Visitors’ Award / runner up. Sponnie won the Visitor’s Award, which lead to a further exhibition in the front window of the City Arcadia Gallery, opposite the FabLab.

FabLab Coventry has been engaged with the creative sector since its establishment in 2016, but mostly in technical roles, e.g. supporting arts businesses through access to vinyl cutting machines. The CTT programme enabled us to enhance this engagement by finding an appropriate skilled and determined volunteer who was able to elevate their volunteering from a little helping out to becoming the cornerstone of the artist’s project.
The creative scene in Coventry often operates as a loose network, with reputation being a key factor. This CTT project work placement / collaboration has earned kudos for Mary as an artist, but also for Marie, whose profile in that community to date has been low, and who is now being recognised as a skilled and hardworking artist / maker in her own right.

This Collaborate to Train project proved highly successful on a number of grounds:

This CTT placement has also created an opportunity to identify a potential role for FabLab in Coventry 2021 City of Culture.

– What a beautiful, joyous surprise!
– A great thing to see.
– Beautifully executed and clearly quite cleverly engineered. Fab job guys! x
– Very much enjoyed spotting the Spon End refs in the marvellous mechanical Sponnie!
– Fab Fish from Fab Lab!
– Fantastic and fun piece of work.
– I want to make something now – such an inspiring and fun piece. Thanks.
– It’s so cool So colourful and unique. Amazing craft work. It is amazing it moves! 🙂
– Love the fish!
– Super interesting and well thought out piece.
– Great to meet Sponnie! Cool tribute to Cov’s history, and learnt stuff about Moira. Hope Sponnie goes on display somewhere…

Quotes from the visitors book at the Festival

Dear Sinead,
I wanted to write to you, to formally thank and congratulate the FabLab team, in particular the amazing skills of Marie Sindel, and technical know-how of Jack Shuttleworth, for bring Sponnie, the time-travelling mechanical fish from Spon End, from an idea to the most magical fruition. Without FabLab Sponnie would not exist! Please can you pass on our thanks to the team.
Sponnie brought smiles to many, many people of all ages, who visited or stopped by Moira’s Wet Fish Shop in Spon End, during the Spon Spun Arts Festival on Saturday 15th September. Over 200 people came by. You may have already heard, but in case you haven’t, Sponnie was chosen for the Visitors’ Award for the Spon Spun Festival 2018.
We also collected written feedback from visitors so that we could share this with the FabLab team. I will forward this next week once we have the six sheets of feedback scanned. Photographer Tara Rutledge has taken some excellent high res photos and a video, which again, I will forward to you next week. You will probably have seen the video that Marie took. And I’ve attached one picture by Andy Holdsworth so you can see Sponnie in the context of the fish shop, his fishy friends in the window and with Marie, Jack and myself in view.
News about Sponnie is too good not to share. I talked about him for around 5mins (mentioning the FabLab, Marie and Jack in the process on BBCCWR’s Culture Club Show in September.) And yesterday contacted Matt Fife at the City of Culture, who says he will be putting info out about Sponnie soon. I may also send something to the Coventry Observer and Cov Telegraph early tomorrow. If you would like to send a quote to include then please do.
Sponnie and Moria’s Wet Fish Shop, was a collaboration between artists, FabLab, Coventry Grapevine and Moira’s family. It brought together mechnical sculpture, imagination, local people, local history, art, singing and poetry into one event. Mary Courtney and Christopher Sidwell, Andrea Mburushimana, Coventry Grapevine, and Marie Sindel and Jack Shuttleworth of FabLab Coventry, worked together to make this happen. It was part of the Spon Spun Arts and Heritage trail which showcased art from around twenty artists in different venues in Spon End, Coventry. The Arts trail was organised by Coventry Artspace, led by Mindy Chillery. This event was funded through Crowdfunding support and artists donated their time.
Christopher Sidwell sang a Sponnie Sea Shanty, and painted a portrait of Moira, who ran the fish shop over 25 years ago. We liaised with Moira’s family who provided her picture. Moira’s sister and family joined in making the fish for the window during one of our art workshops Andrea and Mary ran for the people who use the Grapevine (the place that is now Moira’s Wet Fish Shop), so that fish inventions could bedeck the windows. (Rocket fish, an umbrella fish, grapes of the grapevine fish, a hairbrush fish etc.) These fishy friends were a lovely vibrant backdrop to Sponnie, who was the star of the show.
Many thanks to FabLab and the talented team you have there. As well as the brilliant work by Marie and technical wizardry by Jack (who both came along to support the event on the day along with Helen Lewis), Helen also helped out in the production, including laser cutting Sponnie’s name and his poem, and Claire Corbey made the beautiful spokes for Sponnie’s second eye.
Ah Sponnie… It is true… I am in love with a fish! 🙂
Here are links to further info should you need it. Including the context for the ideas for making Sponnie. He will be in City Arcade gallery as a next stop. And we can discuss, together with the team, other possibilities for him after that. 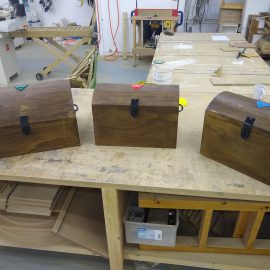 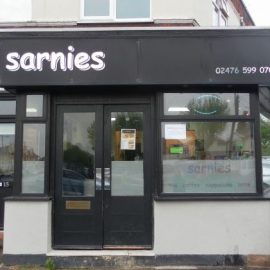 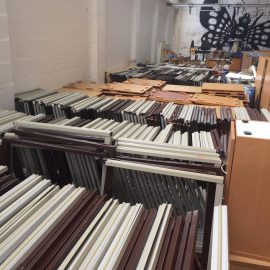